Two of CleanLease washing machines are ready in the container for shipment to Tanzania. Morogoro Support Foundation brings them - along with other material - to the St. Kizito hospital and the Agnes Clinic in the province of Morogoro. Morogoro Support Foundation has been supporting these two hospitals for over 20 years. The hospitals mainly focus on the treatment of patients with malaria, HIV and AIDS, assistance to traffic victims, supervising childbirth and care for mother and child in the maternity ward. A medical team from various hospitals, including Leiden University Medical Center and Alrijne Hospital, and other volunteers, trains local surgeons and nurses, improves and expands the facilities. The foundation has an ANBI status and does its work with the help of donations. After installation of the two donated machines, uniforms and other textiles from the St. Kizito Hospital and the Agnes Kliniek can be cleaned on site.

Report by Henk de Boer and Harry Borst to Tanzania

Departure at 10.35 am by KLM from Schiphol with Boeing 777, very large but still came off the ground. Return ticket for € 670 with only stop in Arusha for Kilimanjaro people. We were at the FQ hotel near the Dar es Salaam airport at 11pm. Customs were a bit difficult about the blood pressure monitor briefcase that we had received from the Rotary Rijnwoude, but after some explanation we were allowed to continue without paying..... 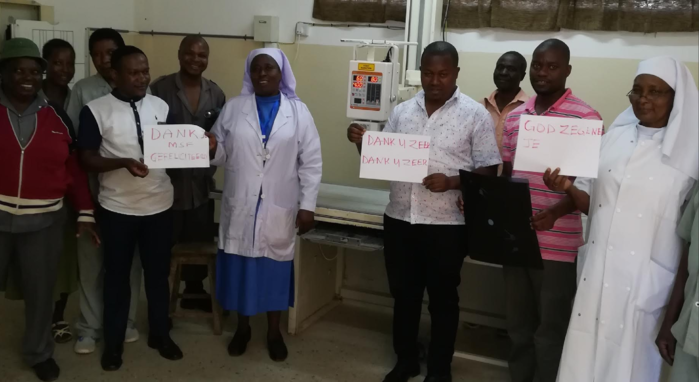 The problem of care in Morogoro has been brought to light by a publication in the magazine 50 Vitaal plus. Especially the problem that the total hospital budget is too low. 40% is paid by the government and 30% by patients.